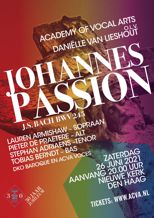 ACVA VOCES is a chamber choir consisting of Musicanti Children's Choir, the Cantamare Vocal Ensemble, the Young Men's Chorus and selected singers from outside the ACVA. That makes the team very special: from the 10-year-old new-bees among sopranos and altos to the extremely experienced singers among tenors and basses.

CORONA PREPARATION
After the canceling of the St Matthew Passion due to the lockdown in March 2020, just two days before the concert, it was generally assumed that everything would be 'normal' again in 2021. As March came near, it became clear that the performance could not take place in March 2021. Nevertheless, the choir had already prepared online, but after the live rehearsals started at the end of April, the real preparation could begin.

Marijke van Klaveren, founder of the ACVA in 1990, who experiences the rehearsals from behind the piano, tells about this: "The progression in that short time is unimaginable. Now we are reaping what has been sown in all those solfège and singing lessons. Investment in the growing independence and musical development of the young singers, which means that this enormous work can now be rehearsed in such a short time! In the Young Men's Chorus, someone who would have sung the St John as an alto in March, but now due to the voice change has studied the bass part. And that in such a short time: chapeau!"

The Dordrecht Chamber Orchestra (DKO), with a working area from Dordrecht to Amsterdam and from Zeeland to the Veluwe,
has decades of experience in professional accompanying
choirs. The DKO now also has an ensemble
that focuses specifically on performing
early music on 415Hz: DKO Baroque.

In March 2020 we were already well advanced with rehearsals
from the St Matthew Passion by J.S. Bach with the young talents
of the ACVA, when the whole country went into lockdown.
That memory makes it extra special to be able to enter into this special collaboration more than a year later,
this time with the St John Passion conducted by Daniëlle van Lieshout.

It is a joy to experience how this music transcends all age and how fresh it sounds with the young and pure voices of the ACVA members. DKO Baroque is looking forward to
the performance on June 26 in the beautiful
New Church of The Hague!

June 26 the ACVA presents a special performance with the St John Passion. You may enjoy a live stream in 360 degrees, directly connected with the  Nieuwe Kerk in The Hague.
You can deside for yourself what part of the choir or orchestra you want to see!

View our teaser! This is what the choir has to say.